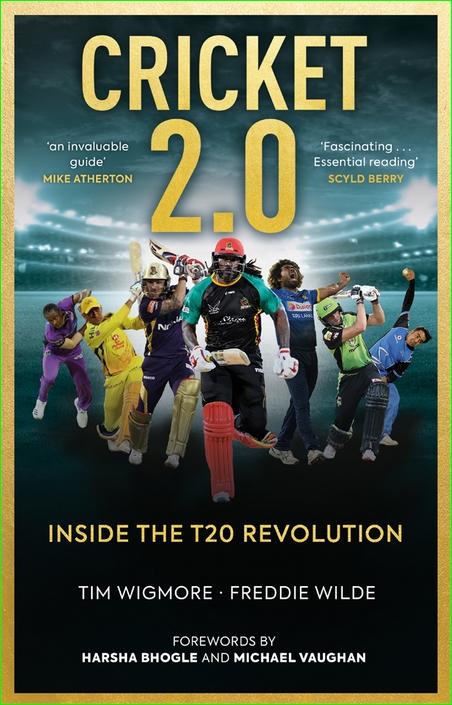 Cricket 2.0 tells the story of how an old, traditional game was transformed by Twenty20 and how this format moved from being a gimmick to the face of modern cricket.

The iconic captain Brendon McCullum, England’s T20 visionaries Eoin Morgan and Jos Buttler and Trinidad’s Kieron Pollard and Sunil Nadine, who rose to become among the first T20 millionaires, explain how they shaped T20 – and how it shaped them. Test greats Rahul Dravid and Ricky Ponting recount what a sea-change T20 represented and decode T20 strategy. AB de Villiers explores the limits of modern batting. The Afghan phenomenon Rashid Khan shows that T20 superstars can now come from anywhere. Venky Mysore, the cricket revolutionary you have never heard of, reveals how the game is changing off the field.

Told through compelling human-interest stories and featuring interviews with more than fifty players and coaches, Tim Wigmore and Freddie Wilde examine how a cocktail of globalisation, new aggressive tactics and huge investment are changing the sport faster than ever before, while analysing the myriad ways in which a traditional game has been revolutionised forever, both on and off the pitch.

This is the extraordinary and previously misunderstood story of Twenty20 cricket – told by two people who have chronicled the revolution.

Digital Transformation from the Inside Out

The Next Production Revolution: Implications for Governments and Business

Photographing Shadow and Light: Inside the Dramatic Lighting Techniques and Creative Vision of Po...